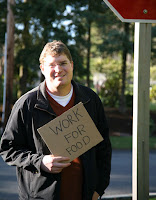 Believe it or not I've decided to “work for food” in 2008. I plan to donate a portion of my personal real estate commissions to support local food banks and soup kitchens in an effort to raise $15,000.

I got the idea after driving to my mother’s home for Thanksgiving. While stopped at a light I saw a woman with a sign that read “Anything Helps.” This is a common sight but it prompt me to act.

My normal reaction to this situation is to act as though the homeless person is not there. If I can, I block my view so I don’t make eye contact. I then sit there feeling uncomfortable waiting for the light to change wishing I knew of a way to help, other than by giving them my spare change.

I’ve been acting out this same scene for years, but I’ve decided to do something about it in 2008.

There are over 8,000 homeless people living in Seattle. I intend to support two non-profits that are close to my office in Ballard, the Ballard Food Bank and the Phinney Neighborhood Association’s (PNA) Soup Kitchen.

The Ballard Food Bank’s mission is to assist individuals and families in maintaining self-sufficiency by providing assistance for basic needs. “We distribute food, clothing and personal hygiene items. In addition, we also have a meal program that provides three hot lunches a week, and we hold mail for those with no permanent address. These services are offered to Ballard, Queen Anne and Magnolia families who are having trouble making ends meet,” says Executive Director Nancy McKinney. “The majority of our income comes from private donations.”

According to Ann Bowden, Development Director of the PNA, “Our soup kitchen serves three meals a week, two lunches and one dinner. We feed 200-250 homeless, low income, elderly and disabled people each week or more than 22,000 each year.” The PNA partners with two churches, St. John United Lutheran on Phinney Ridge and Calvary Lutheran in Ballard. Much of the food comes from Northwest Harvest and Food Lifeline. The soup kitchen requires one staff person and 5 to 6 volunteers to run and is a substantial expense to the PNA’s budget each year.
In a final gesture of goodwill, I will make the donations in the name of my clients. Even though the money will come from my personal proceeds, I’d like my clients to feel part of the giving experience.

Buyers surfing the internet and visiting open houses occasionally find the home of their dreams on their own. When this happens are they better off to enter a contract with the seller using the Listing Agent or contacting a Buyer’s Agent?

Purchasing real estate is a complex and major transaction with many details to be handled. A Buyer’s Agent will help structure an appropriate offer and negotiate the terms that are in the buyer’s best interests, which is a service that is truly a good value.
Posted by Andrew's Blog at 9:25 PM No comments:

I read the news article (see link below) and thought I’d pass it on to you. It outlines three experts’ predictions of the future housing market for Seattle WA. To summarize, Fortune Magazine predicts that home prices will fall 19.5% in the next five years, Forbes Magazine says homes prices will rise just over 3% this year, and Moody’s Economy thinks there will be a slight drop from now until next summer when home prices will start to appreciate 14% through 2012.

Who’s right? It’s hard to say. Since we really can’t predict what the market will do, the important thing to keep in mind is that it is best to move when the timing is best for you. If you intend to buy and hold your home you should do fine because historically the value of real estate has always increased.

Join me for Super Beer XX! This is the Phinney Neighborhood Association’s annual beer taste which will be taking place on November 10th starting at 7:30 PM. I’ll be volunteering for the event, and it would be great to share some excellent brews and a good time with you. For more information go to http://www.andrewlparker.com/bestbeertaste.htm .

By the way I won’t be participating in the Ballard Art Walk in November. See you in December
Posted by Andrew's Blog at 11:36 AM No comments:

October 2007 was a down month as expected for the greater Queen Anne, Magnolia, Ballard, and Greenlake areas. The number of homes sold dropped by close to 1/3 with the average home sold for 2% less and the median home sold for 4% less than in October of 2006.

Homes that were priced right still sold right away. The 145 homes that sold within the first 30 days of the listing date were purchased for just over 100% of the listing price (% sp/lp). While the 41 homes that sold between 31 to 60 days were purchased for just over 97% (% sp/lp). A difference of about 3%. A note to sellers, choose an agent who will price your home right. It will save you time and money.

With the holidays right around the corner the market will remain soft for the rest of the year. To conclude I expect the market in 2008 to be similar to 2007. Things should pick up in the spring and summer of 2008. This winter is a great time to buy. The real estate market is unlikely to crash in Seattle like other areas of the country. The economy is good, job growth is good, and experts estimate 135,000 more people to move to Seattle in the next 5 years.

This posting was edited on November 7th due to mathematical errors.
Posted by Andrew's Blog at 1:44 PM No comments:

I'm on the Phinney Neighborhood Association (PNA) Beer Committee and it's time for the 20th annual winter beer Super Beer XX. It is on Saturday November 10th from 7:30 to 9:00 PM. Choose 10 samples to taste from over 20 Northwest micro-breweries who bring their new winter ales and other favorite beers to taste. Enjoy pub snacks provided by the PNA Beer Committee, blue grass music and a silent auction of beer paraphernalia.

Tickets are $25 for PNA members and $30 for the general public. Ticket sales are limited, so buy your tickets early.

If you'd like to volunteer for this fun event and get free admission let me know!
Posted by Andrew's Blog at 9:15 PM No comments: