The registration deadline for the Magnolia Art Festival has been extended to July 31st. If you’d like to participate fill out and mail the registration form in today! Registration Form For more information go to http://www.andrewlparker.com/magnoliaartfest.htm 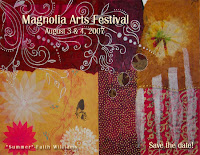 For the greater Queen Anne, Magnolia, Ballard, and Greenlake areas home appreciation slowed for the month of June 2007, and when comparing June of 2007 to 2006 there where also fewer sales. A total of 274 in comparison to 316, a drop of 13%.

The average home appreciated 3.7% and the median home appreciated 3.1%, which is much less than what has been seen for some time. Buyers are still snatching up well priced homes though. Homes that sold within the first 30 days, were purchased for 101% of the listing price (% sp/lp), but homes that sold between 31 to 60 days were purchased for 97.89% (% sp/lp). A difference of just over 3%.

April was a hot month with the average home selling for 16% and the median selling for 11%more than in 2006. May was also a good month with an average of 10% and a median of 7%.

Typically the first 6 months of the year are the strongest and the market maybe beginning to slow for the year because the first 15 days of July look to be continuing June's trend.
Posted by Andrew's Blog at 2:03 PM No comments:

In addition to my work as a Realtor, I play the saxophone and graduated from Cornish College of the Arts with a degree in jazz performance. I'm excited to share with you the news of my upcoming performances with my jazz quintet this summer. 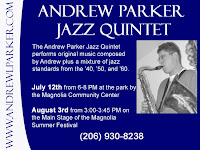 On July 12th from 6-8 PM I’ll be performing at the park by the Magnolia Community Center, and on August 3rd from 3:00-3:45 PM I’ll be on the Main Stage of the Magnolia Summer Festival.

My quintet features Thomas Marriott on trumpet, Geoff Harper on bass, Joshua Rawlings on piano, and Matt Page on drums.
Click here to listen to an orginal of mine title "Look East".
By the way, this month I won't be participating with the Ballard Art Walk. Instead, I'll be at the Summers Best Beer Taste at the PNA. If you'd like more information go to: http://www.phinneycenter.org/events/beer_summer.shtml

I hope to see you there!
-Andrew
Posted by Andrew's Blog at 12:12 PM No comments: